We have no specific item of interest to put on our blog today, so decided to try and establish who is actually reading the Topboss Blog or if we are merely rambling off to cyberspace everyday!!!

If you do read our blog – please can you post a quick comment just to let us know if you read it daily, weekly or monthly.

It would be most appreciated

What exactly is the UIGEA? Here is an excerpt from Topboss Group which briefly describes what the UIGEA is ” On Friday 13 October 2006 President George W. Bush signed a law to deter terrorists from smuggling weapons into the United States inside shipping containers that enter the country from foreign ports each year. This is known as the Port Security Bill. Attached to the Port Security Bill was an unrelated provision – the Unlawful Internet Gambling Enforcement Act ( UIGEA ) which prohibits online gamblers resident in the USA from using credit cards, checks and electronic fund transfers to place and settle bets.Whilst this bill didn’t actually make online casinos in the USA illegal, it did put a lot of pressure on the online casinos to find payment processors who were prepared to process gambling transactions from players resident in the USA, and unfortunately they are few and far between, so there was a number of online casinos that were forced to close their doors to USA resident Players”

What a shame to hear that Playboy Gaming is closing down their casino and poker room. It’s not going to be much fun not seeing the popular playboy bunny around anymore….well… unless you frequent other kinds of sites that is….cough…cough…..

Although this blog is primarily about gambling – I could not resist letting off some steam about our telephone service provider in South Africa known as Telkom.Those of you who read this blog regularly may have noticed that there has been no posts for the past 4 days. This is not because we didn’t have anything to say, but because our phone lines were struck by lightning. This does happen from time to time and is all well and good but despite numerous telephone calls and promises that “the technician will be there at 11am” It took 5 days for them to eventually bother to come around and fix the problem, and this was achieved purely by calling on a favour of a contact we have at Telkom, otherwise who knows how much longer it would have taken. We are also zoned as a business which is supposed to get preferential treatment compared to a residential address. If this is what preferential treatment is, then I would hate to see how long they take to fix a residential telephone!!!!

I wish another telephone provider would come into South Africa as we would be their first customer!!!

Play all of the above NEW RTG Slots at : Slots Plus Casino

There are quite a few things you should know about online and live casino gambling before you break open the piggybank. One of the most important is that most casino games carry a negative expected value induced by the house edge. There are a few exceptions to this rule of course. Blackjack for instance can be turned into a 0 house edge game through skill or the edge can even be reversed in some cases. Certain variants of video poker can also be turned into positive EV games through optimal strategy. The bottom line is however, that the odds are not stacked in your favor when you play against the house. Unlike in poker, where the house collects the so called poker rake off a game which is played between two players, the house has no choice but to introduce the house edge in order to generate revenue in casino gambling. In poker, the house will often reward players with rakeback, something that casinos offer too in the form of comp points loyalty programs.

Now then, this house edge theory is not a secret. As a matter of fact, every trustworthy and fair casino and online casino fills its players in on exactly how much the house edge is on any given game. They usually give you payout rates (which is a marketing-oriented move on their part, as they simply tell you you’ll win X% back of every dollar, instead of saying that you’ll lose X% of it) which are varied depending on the type of game you play. These rates are in the 97-98% range in the case of slot machines and 92-94% in the case of roulette (where different bets may carry different house edges). The house edge is public information. There’s something however that is much less known about the house edge: it is not the main source of revenue for a casino. While it may look like that, and the casinos will probably tell you it is so too, the house edge is a simple tool in a greater equation. Its presence induces a process which is really responsible for the revenue the casinos make. This revenue is called the house drop, and while the house edges are in the 1-10% range (could be much more on games like bingo and keno) the house drop is generally around 30% but it can even reach 100% depending on the player for whom one calculates it.

Here’s how the house drop works. Let’s say you walk into a casino with $10, which you plan to play on the roulette (let’s suppose there’s a 5% house edge on it to make the calculus simpler). You make your ten $1 bets and you lose 50 cents. That’s your 5% house edge right there. Of course this is discussed in general terms. You may end up with more money after your ten $1 bets, on average however and over the long run, you will lose 50 cents, so it’s mathematically reasonable to use this amount.

What happens with the $9.5 that you’ve left after your initial bets is what matters though. You decide to re-invest your money, and you make 9 more $1 bets. You lose 5% on those too. If you add that money up to the $0.5 you lost on your previous bets, you’ll see you’ve lost more than 5% of your initial $10 bankroll (as a matter of fact, at that stage you’ve lost almost 10%).

If you play on afterwards, you’ll drop even more money. If you play till your bankroll is all gone, you’ll register a 100% house drop.

Why should you play in casinos then? Because the variance offers you the chance to take down a fabulous amount of money on every bet that you make. If you do succeed in it, it’ll be up to you to walk away with the money and not let the system take it back from you. Don’t forget to choose a casino which offers you poker rakeback like benefits, as that will cut into the house edge and implicitly into the house drop as well.

Sometimes the ASA can get a bit ridiculous in our opionion. They have banned 3 of Ladbrokes tv ads due to a single complaint from a viewer. Below is Ladbrokes press release, and a link at the bottom where you can view the actual ads and decide for yourself if you believe they should have been banned

STATEMENT FROM LADBROKES IN RESPONSE TO ASA BAN ON LADBROKESCASINO.COM ADS .

Ladbrokes today confirmed it will seek a review of the ASA’s ruling to ban its award- winning advertising campaign for ladbrokescasino.com following just one complaint from a member of the public.

The betting and gaming leader believes the ruling is an incorrect application of the CAP (Broadcast) TV Advertising Standards Code and is in effect a ruling against using humour in gambling advertisements. Ladbrokes will now lodge a request for a review with the Independent Reviewer of ASA Adjudications.

John O’Reilly, Managing Director of Ladbrokes Remote Betting and Gaming commented: “Ladbrokes fully supports the code of practice relating to gambling advertising but this ruling is an example of political correctness going too far. We believe the ads are compliant as they are humorous and show people in fantastical situations to which no one would aspire. Consumers know that you cannot jump from a plane using a 30g pack of crisps as a parachute!”

At every stage of development process Ladbrokes’ marketing teams and advertising agency M&C Saatchi carefully ensured the campaign conformed with the relevant codes. Following production the advertisements were approved by Clearcast, the company responsible for the pre-transmission examination and clearance of television advertisements before broadcast.

Following the ASA’s draft recommendation to uphold the complaint, Ladbrokes requested a referral to the CAP General Media Panel, an independent panel made up of industry experts and one ASA Council member. Despite the panel’s recommendation to dismiss the complaint, the ASA Council ruled the ads were in breach of the CAP (Broadcast) TV Advertising Standards Code rule 11.10.1(h), by portraying gambling in a context of toughness and linking it to recklessness.

The campaign for ladbrokescasino.com was a finalist at the Cannes International Advertising Awards and was a London International Awards Silver Winner. The campaign was comprised of three advertisements – “Shark”, “Climb”, and “Parachute” – with all three using a documentary style format to depict fantastical situations where people undertake bizarre acts to “quench their thrill buds”.

The New Mega Moolah 5 Reel Drive Progressive Slot from Microgaming is made up of 4 tiers. Hidden within its depths is a Wild, Free Spins and not 1 but 4 Progressive Jackpots !

So the higher you make those bets, the better chance you stand of hitting the fantastic four!

Spin that 20 position Jackpot Wheel which takes you to Mega, Major, Minor or Mini jackpot wins; use the Wild, Scatter, Multiplier and up to 10 Free Spins with a 5x multiplier features to build up to winning combinations where the most skilful chancer’s amongst us can completely cash in on mega money wins!

So the aim of the game is to make it to the top! 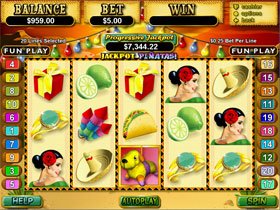 Asides from the huge jackpot on offer, Jackpot Pinatas also has a bonus feature where you can get from 5 to 25 Free Spins.

To read our review of Jackpot Pinatas and other RTG Slots – Please visit – Slots Magic.

USA Players are accepted at most RTG Casinos

Jackpot Pinatas can be played at Slots Plus