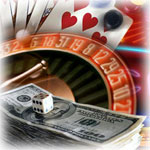 How exactly does gambler’s fallacy influence gambling? People are naturally inclined to look for patterns in chaos. We’re all programmed to try to make sense of things, sometimes even of occurrences that are completely random and chaotic and which carry no sense whatsoever. This is the very reason why people go about looking for patterns in the numbers the roulette wheel spits out. The same goes for every game which is based on randomly generated numbers. People play the roulette and think: the last 5 spins all resulted in black, a red is bound to land soon. This way of thinking is apparently encoded into our brains on such a basic level, that we can’t do anything to shake free from it. Even when I watch a wheel I don’t play at and see several black results turning up in a row, and I focus on the fact that none of the spins is dependant on the last one, deep down inside I still kind of wait for that red one to pop up.

The Gambler’s fallacy is at the base of the Martingale system, of which I suppose every gambler has heard. The Martingale system consists in doubling one’s bet every time he/she loses, in order to recover the losses. With an infinitely large bankroll, the Martingale system would probably work too, but because of the fact that all roulette spins are completely independent, extremely long losing streaks may occur without a problem, which may easily be long enough to kill the bankroll of the player who has the blissful temerity of actually staking money on the fallacious Martingale System.

One thing has to be noted about gambler’s fallacy though. It’s only a fallacy when it occurs at tables where the object of the event players bet on is reset for every bet. In blackjack for instance, as cards get removed from the deck, events directly impact subsequent ones. There, the “gambler’s fallacy” is at the very base of various card counting techniques. If the blackjack deck were substituted with a completely new one after every round, card counting would be impossible.

Whenever you decide to play in an online casino, make sure you pick one that gives you a loyalty deal like rakeback in poker.

Please read this important information before gambling at any online casino as it is your responsibility to ensure online gambling is legal in your country of residence.